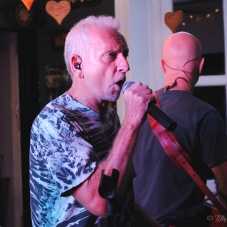 The Alibi are a five-piece rock band from Sussex in the South of England, playing a high-energy set of classic covers.

The band have a wealth of experience from having been active on the southern music scene in a succession of acts since the late 70’s. Older rock fans may recognise several familiar faces from some of the area’s bands from that era, with members previously in acts like Ptarmigan, Nightrider, High Risk, All That’s Fiction, A Kind of Fury and Crystal Void.